There’s no such thing as a late holiday.

And what an eventful couple of days it was. Emily and her boyfriend Connor came up from Kansas to have a late Christmas with us at my dad’s apartment, which doesn’t usually see so much action like it did. Another round of gifts was very pleasing and entertaining. This is the latest we have opened gifts and it felt vaguely different because of the rush factor not being there. I received a couple more shirts, including another Star Wars themed to go along with the two others in my collection, a much needed guitar songbook, and a retro series Sega Genesis loaded with over 80 games and able to accept original cartridges. Sure beats anything from the modern day game consoles.

Most of the time during those days the two Kansasites stayed, it was eating and eating. We first ate out at McDonald’s, then Virginia Coney Island (I ordered the Elvis burger), then Olive Garden (the flirty waitress and her cheese grater), got pizza and breadsticks from Klavon’s (long, long wait), and ate at the icecream parlour today.

Tasting wine at Olive Garden was something. Connor acted all connoisseur and sophisticated in the art of wine tasting, swirling it around and sniffing out the aromas.  The waitress was very friendly and sported a playful and cutesy attitude. When I asked for more cheese to be grated onto the big bowl of salad that was ordered, she put some on my empty plate, laughed, and said “there’s your more.” Along with an alcoholic beverage, I ordered the chicken scampi, which became leftovers that took me two days to finally finish because I kept forgetting about it in the car trunk.

Damn. I didn’t win the Powerball lottery. Got just one number from three tickets. Three people from California, Texas, and Florida won the money and split it. Why is it always the big, iconic states that win? That can’t just be a coincidence.

Now that the big billions are gone and the jackpot is back to its minimum amount, it will be easier to play it with the odds being better and not so many people buying a ticket. I will continue to play my same numbers. It may take me the rest of my life but someday I’ll get lucky – and probably end up with bad luck after winning. For the people that have just won the lottery, I hope they are smart enough to get a financial advisory or lawyer to help them with it. Having that much money and nowhere safe to put it (not even a regular bank) can be risky.

My new friend Connor was a ball of hyper energy as usual (referring to the last time he was with us) and upset my dad quite a bit with his lippy attitude and ego, and tendency to correct people. When Connor said that the radio playing the national championship game was too loud, dad stormed away from the table, where we were playing Cards Against Humanity, and shut off the radio that was playing in his room.

Today we all went to the Westwood Mall. Emily and Connor wanted to ride around on these motorized animal riders, Connor being way too big, so they both paid five dollars. I would have joined in but thought five dollars was too steep for this silly thing, so I went around recording the two with Emily’s phone. She then shared the video on Facebook.

Connor and I then stopped by Gamestop so he could buy something with the giftcard he got for Christmas from us. He ended up buying Minecraft for the PS4 and a guidebook. While sitting on the bench outside the store, we talked about games and different things that could be built in Minecraft, like redstone activated castle doors and the lot.

Then him and I went into Hot Topic (a punk/pop culture store) and browsed around. He was looking for a gift to get Emily, which ended up being a Zelda themed dress that I was hesitate about at first but then okay with after seeing my sister walk around in it, reminding me of something Luna Lovegood would wear. He also bought a Majora’s mask t-shirt to go along with his matching medallion. Hot Topic is one store that had since lost its “cool” edge ever since I graduated high school and grew up. Going back in there brought back memories of my first time shopping there and buying my first piece of “dark” clothing.

The whole group later shot a couple rounds of pool at the Avenue Billiards. Connor and my dad had one table while me, mom, and Emily played amateur at another. I ended up playing a round with dad (getting smoked) after Mr. Know-it-All gave up trying to beat the pool shark that my dad is.

Everything feels so much quieter when it’s just me, my uncle, and mom in the house again. My thoughts are much louder and it is easier to write when I don’t feel distracted. I love it when everyone is together and having fun talking and laughing but in the back of my mind I know I have responsibilities and can’t just let things go, which can be very easy to do when I am having such an exciting time, like I did these past couple of days.

Our boy Connor is definitely the X-Factor when it comes to these family get togethers. He is quite the polar opposite of my immediate family, who are usually laid back and calm while he always has to have drama and be causing a scene. I like to say he complements me though and I hope that we both can get to be real good friends for years to come. 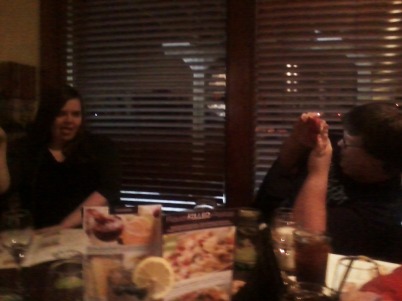 Daily Prompt: Ripped Into the Headlines

One thought on “The January X-Factor”