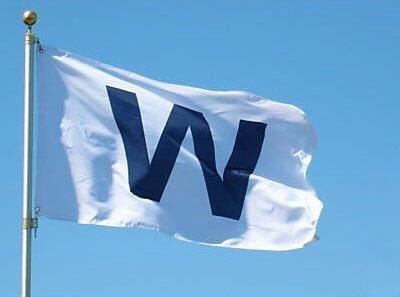 The echo from the Cubs last World Series trip in 1945 finally was increased to a full on boom of cheering and ovation as the lovable team from the North Side shut down the Los Angeles Dodgers 5-0 last night. It almost seemed too easy, save for a few bobbles of the ball to Cubs infielders and a late base hit in the ninth that immediately raised suspicions of the Curse of the Billy Goat rearing its ugly head again. But tonight was an entirely different story. The Cubbies were a team of destiny, as they had been all season long and through the playoffs. They were meant to win this time and not come up short again as they had done for the last 71 years.

My prediction in one of my previous posts is halfway correct.

There is now only one more thing to do: get four more wins and really shock the world and hope something devastating doesn’t happen. Because breaking a 108 year drought is not for the faint of heart. There are 108 more outs to go for the Cubs to win their first World Series since 1908. Eight of course goes into four, the number of wins they need. Eight divided by four equals two, the number of championships the Cubs have. The eights seem to be a pattern here. The Cubs were six outs away in the eighth inning of the 2003 NLCS up 3-0 before their dreams went down the long drophill of the Bartman coaster and the Marlins scored eight runs, forcing a Game 7 and winning that to go to the World Series. 2003 is irrelevant now of course now that the Cubs have finally broken through But Steve Bartman is a permanent part of Chicago Cubs history. If he came out during a World Series game next week, he would probably get the loudest applause Wrigley Field can manage (including the rooftops that act as an extension).

So they are in the 2016 World Series. Well, that is quite an accomplishment that was over 70 years in the making. If the ivy walls could speak, they’d tell us of the heartbreaks and disappointments over the years. The ivy wasn’t even on the wall at Wrigley back in 1908, being added in 1937.

It’s going to be the Chicago Cubs vs. the Cleveland Indians, two teams from two Midwest states separated by Indiana, so the traveling is going to be very short and straight forward.

The epic 2 hour movie of the Chicago Cubs 108 year struggle will end fittingly if the Cubs win the World Series. If it ends in disappointment, well, there’s always next year as Cubs fans say.

May the best team win and let’s play ball!