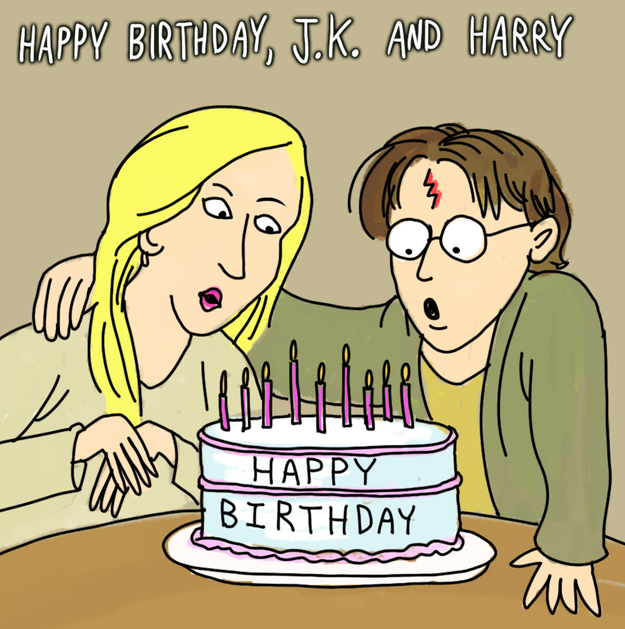 My childhood hero is getting old.

It’s Harry Potter and author J.K. Rowling’s birthday today, both born on July 31st. The celebration weekend goes on with the release of the unofficial eighth book in the Harry Potter universe “Harry Potter and the Cursed Child”. While this book is available in a physical paperback form, I bought it on Google Play for a friendly price of 14.99. It’s not really a novel but the script from a stageplay adapted into a book. The drama continues with the kids of Harry, Ron, and Hermione going to Hogwarts. Albus Severus Potter is the main character in this story and deals with some real issues, including questioning his family name and heritage. What’s in it for the future of Harry Potter and company? Read the story to find out.

It was a novel I couldn’t put down,
A fascinating read, Africa to the toubob’s ground
At least the first half of the story,
And then my interest started to lean,
Characters became one dimensional,
All those years on plantation, monotony they secede
Being an old paperback,
It started to fall apart,
First the cover then the prelude,
And into Chapter One like a shark
Into disrepair I saved it so,
But by this time the book was going slow
Kunta was the best, the rest trailed off,
I guess that was the upset peak,
When personality start to cough, cough
A rude awakening
To find out later on
The story I thought was true
A fictional theft by Haley
Made a profit off fooling me and you
I won’t spoil it anymore
For those who haven’t read
But my heart is with the chickens
Who suffered for greed to get ahead

In response to The Daily Post’s writing prompt: “That Stings!.”

What’s the longest you’ve ever gone without reading a book (since learning how to read, of course)? Which book was it that helped break the dry spell?

The Most Interesting Man in the World explains it best for me: since my computer and the Internet dominate my life these days, taking time to pick up a book has fallen out considerably. I often find myself merely reading the first couple pages of a novel before getting bored, putting it down, and proceeding to look up random crap on the web or opening up the fridge for the umpteenth time hoping to find something good to eat and then closing it again. But my interests in books picks up again when I start reading Harry Potter, since it is such an engaging series and is not hard to bite into (I mean that in a literary sense of getting greatly invested in the novel, not taking a juicy piece out of it).

It was about a year since I last read the whole way through a book but then I picked up Harry Potter and the Prisoner of Azkaban out of the brand new set of seven I had ordered from eBay. I started with the third book intentionally because that

was how my experience in the Harry Potter universe began – in 2003 when I was eleven years old, ironically the same age as Harry in Sorcerer’s Stone (Philosopher’s Stone for the English), that I also read after Chamber of Secrets. Yup, I read the first three books in reverse order, diving into the middle of the saga and not having much clue who the characters were or what all the terminology meant. I read Azkaban first because that was the only book besides Goblet of Fire on the classroom shelf. I remember there being so much hype about Harry Potter, seeing all the merchandise floating around (a kid walking through the store with a Harry Potter backpack still burns my retinas), and how kids (and adults) were saying this was the best book ever. But it was the ignorant people who said the book was for children and nerds alike that turned me away from the series initially.

Well, I was hungry for a good read one day near the end of fifth grade and decided to try out one of the HP books on the shelf. I was quite a loner and books were a way for to fill an empty void in my life. Since I was a little embarrassed about reading Harry Potter, I snuck it out of the classroom and started reading the novel at home and oh, my…it was fantastic! I was hooked from the first sentence and not starting with the first book put some disbelief into the series for me as I didn’t readily know what to expect or what was supposed to happen. From first finding out about the Dursleys, to discovering this boy wonder with a lightning scar on his forehead, to being fooled by the notion that Sirius Black was indeed a murderer of 13 innocent Muggles, the book took me to a place I had never imagined before. Every night I read that novel and no one else even knew about it so it was a guilty pleasure for a while because Harry Potter had not quite hit the worldwide fan craze. I still remember the crispness of the pages, the marvelous artwork on the jacket, the magic that seemed to spill out into the air as I read and read, moving my mind into a frenzy, holding on to every word, eager to figure out what happened next.

After Azkaban, I immediately went to reading Harry Potter and the Goblet of Fire and that turned out to be one of the scariest

reads for me, especially during the scene in the graveyard where the ratty Peter Pettigrew kills Cedric (“Kill the spare!”). To this day, I see that book as the turning point in the series, when Harry and the gang starting growing up and getting into more darker situations that have deadly consequences attached to them. Something changed in me as well after I finished Goblet; I felt older and wiser and started seeing the world in a new way. The bar was set higher for me in terms of quality of novels. For a while, Harry Potter seemed like the best thing since  VHS tapes for me, that is until I got around to Artemis Fowl which is a whole nother story.