Yesterday is now just a memory

Tomorrow will be something new

In a sea of tribulation,

The walls closing in on me,

The hands of the clock ticking on,

It’s really hard to stay relevant these days, with the world moving so fast. Technology keeps advancing at an alarming rate. The Internet continues to grow and dominate discussion. Anything that was popular a year ago has already gone past people’s minds. If you want to stay on top, you have to keep working, or else you fade into the past. I was born in the 90s and any remnant of those days probably resides in the darkest corners of the world or up in attics collecting dust.

I wish I could slow it all down and have time to enjoy the things that are popular right now, instead of having to move on to the “Next Best Thing”. I’m usually one of the last to pick up something new and exciting because I don’t easily give into hype. By the time I hop on the popular bandwagon, the thing that was cool and trendworthy has already lost its luster or changed into something completely different. I haven’t even laid my hands on an iPhone – ever – and it’s going to celebrate its 10th anniversary next year.

I’ve recently been using the Wayback Machine to take a look at the way popular websites have grown and changed over the years and it’s quite interesting. Webpages from the early 2000s look so outdated and unprofessional with no uniformity or branding at all. I was looking at YouTube and saw that it started out as a simple place to upload and watch videos and then eventually developed into this immersive experience. The video player that is the focal point of the website has changed. It used to be this square box centered on the page with a jumble of sharing options and other buttons underneath – very messy and cluttered – and now it’s this beautiful widescreen rectangle siting snugly against the left side of the screen with no clutter at all. They’ve changed their layout a number of times, going with some that people loved to others that were totally disliked. I also took a look at some individual channels (like Smosh and PewDiePie) and how they started out from humble beginnings and have continued to please their fans today.

The pace of relevancy all depends on how people grow and change over time. How interests evolve. If a product or person doesn’t keep up with the times and how people change, it or they will won’t survive. With the “Yeah!” or “Nay” response getting even more clear and quicker, you have to really try hard to make something that is appealing to a wide audience.

If you could slow down an action that usually zooms by, or speed up an event that Nnormally drags on, which would you choose, and why?

The time passes by so quickly that we lose our senses and grip. There is no escape from its clutches.

Pass by the clocktower and look up to see those familiar hands crossing at the 12. Without clocks, time is merely a setting and rising of the sun. The sun doesn’t actually move though, it’s the earth that rotates around it. Calendars are a human invention, the twelve month system a convenient way of chronicling our experiences into discrete sections of time. When looking at the universe as a whole, we humans seem very tiny indeed, very small on a larger scale.

This picture I got of a clocktower is very blurry, of a low quality because the camera I use is useless when capturing objects at night, from far away. I like that the actual clock is being overexposed and is all white. I’m taking that to mean, in spiritual terms, that time has no defined parameters, cannot be simply known as one thing because it may be different elsewhere, like in space, where it might go faster or slower. I think the bright white circle represents the opportunities that always lie in the future. There are always bright spots to look on. Time is a gateway to so many events that have yet to happen. 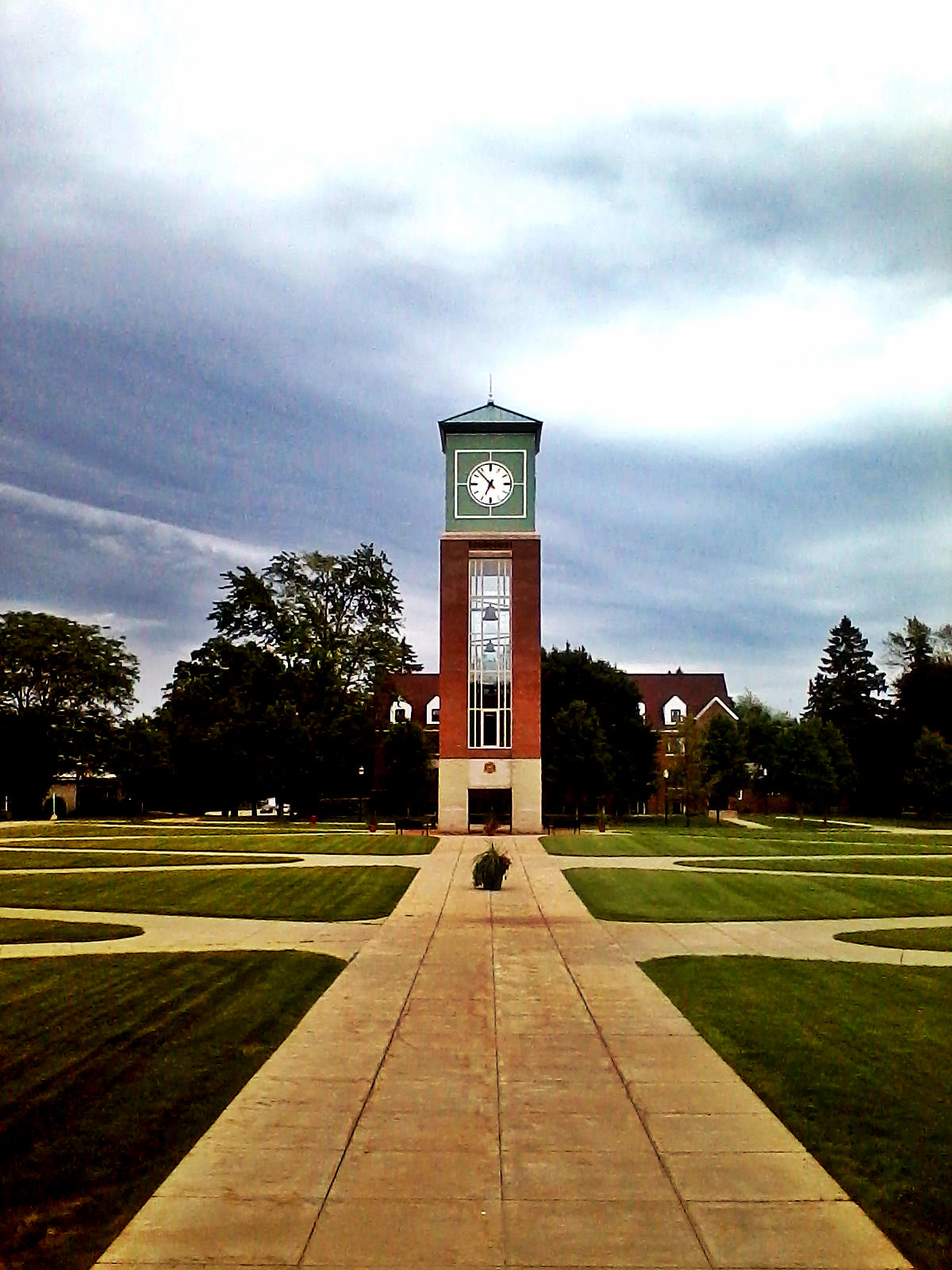 The old clock tower on the campus of Spring Arbor University is what keeps me coming back to that place, even after I have moved away. It has always placed a sort of mystique on this part of the college for me and sticks out for me whenever I walk around the grounds, always being the focal point of many photographs I have snapped there. Hearing the bells ring 12 times at 12:00, that haunting sound echoing throughout the area, was always a memory from my six years living here, and a comforting feeling.

I couldn’t help but notice that the bar at the top of the editing window for posts today has a rainbow strip going across it. This is obviously because the Supreme Court has just legalized same sex marriage nationwide. What a miraculous day in the long and hard fought battle for equal marriage rights. It’s great that WordPress is honoring it in a nice subtle way.

Today’s also the second anniversary of this blog I am writing for, being registered on June 26, 2013, the first post being published on June 27, 2013. I try to keep focusing on making this blog better and to keep everyone happy, but there have been times where I’ve slipped up and actually have lost viewers and followers. All in all though, I feel pretty confident with myself moving forward.