The train is moving again. The glorious sounds of the engine meshing with the blurring of the landscape as the Amtrak rushes, backwards from my seat position, through the countryside of Michigan, the lush forests, farms, and hills of an old land that reflects the early days of the state and even the country, when cities were few and far.

We’re packed up and ready for another trip down to Olathe, Kansas. This would be the 5th or 6th time that the family is headed down to the Heartland to see the youngest sister and her significant other, the first time being in the summer of 2014 when we visited the University of Kansas. Kansas is still quite new to us as we have only scratched the surface of it, having only been near the border cities and not into the deep part of the state.

The conductor checked my ticket again today, as he always does, scanning it and giving it back to me where I place it back in the top compartment of my luggage bag.

Because of Kansas, I get the song “Dust in the Wind” playing in my head, and eventually on my computer. It is a song symbolizing our short time on this earth, that in the end we are just made up of earth stuff, living our lives and then being recycled back into the environment, continuing the cycle. We rent a period of time here to do as much as we can, to explore and learn about our history and what is beyond our imagination. The band is actually from Topeka, Kansas and released “Dust in the Wind” in 1977. The title comes from a passage in the Bible by Ecclesiastes:

I reflected on everything that is accomplished by man on earth, and I concluded:

Everything he has accomplished is futile — like chasing the wind!

In the end, everything we do, all the money we may or may not have, doesn’t matter one little bit, because all of it doesn’t go with us. The only thing we can hold onto are our hopes and dreams and to believe that there is more to life than just living and dying.

It sure is a big break from me playing video games for many hours straight, only getting up once in a while to eat something or use the facilities. I’ve become so addicted to playing Batman: Arkham Knight, the explosive finale in the Arkham series of games. Probably one of the best games I’ve played in a while, besides Skyrim, which is why I’ve had a hard time putting it down, because there is so much to see and do. From what I know so far, near 90% completion of the game, it is the ending stories of several high profile criminals in Gotham, and they all get locked up in prison, though I’m not sure yet if they escape or get released by some outside help.

For now, I continue to listen to the train’s whistle as it rumbles down the track. The usual route is stopping in Chicago at Union Station and then taking a bus to Wisconsin, but that is not the case this time. It will be a longer train ride to Lawrence, Kansas, going through a lot of flat farmland in Illinois and Missouri. It sure is a lot better than driving down there, which is what we did the first time, staring at boring scenery for hours and hours, but I remember it fondly and cherish every moment of it.

Knows nothing of this land

Is wowed by the landscape

And let the born and bred

While he simply browses

The history and the magic

A stranger wowed by the exotic

When your home state NFL team is being a disappointment (this is nothing new), it’s time to take a vacation or at least try something new. This is what I consider a “happy place”. I’ll just relax in the sand and forget about sports. It’s all trivial stuff anyway. Sometimes, it’s just best to clear my mind and think about the future and what I can do better with my life. When I’m having trouble writing and becoming flat and unmotivated, there’s a need to refresh and find my groove again.

I like to think that this photograph is the ideal description of what my mind should look like, but of course it’s more complicated than that. Most of the time it is like a black void and feels as if nothing is there, but once the idea train gets a-chugging, it turns into an industrial factory with ideas being manufactured like clockwork. And that’s what I love, that reassurance that I’ve still got it, the will to be creative and not get lost in a flat, uninspired universe ruled by a totalitarian government where everything is the same. That would be horrible.

In response to The Daily Post’s weekly photo challenge: “Connected.”

It feels pretty awesome to spend a couple nights in a completely different house in a different state. Free from the monotony and boredom of living in my usual dingy quarters. My cozy vacation home in Illinois has a couch and comfortable LA-Z Boy chairs, a nice spacious kitchen and dining room, a large HDTV that has a PS3 hooked up to it, and a basement that is not cold, grey, and spooky. There’s also an above ground pool out back but it would be too strange to get into someone else’s pool and it’s probably cold as ever.

There really are no worries in my life at the moment. Well, I have student loans to pay back that are threatening to really hurt my credit and ability to continue my education, and the ever need to look for jobs and not procrastinate looms over my head, but other than that my life is free and easy. No one fights and we all are just easy going and laid back.

If there wasn’t anything for me to do tomorrow, not that there ever is, if I didn’t need to worry about writing blog posts and keeping up with the community, I would probably be playing games on my computer, watching Netflix, YouTube, or taking a much needed walk outdoors. Maybe even jumping into the pool before summer comes to an end and it closes.

In response to The Daily Post’s writing prompt: “Nothin’ But A Good Time.”

Imagine that tomorrow, all of your duties and obligations evaporate for the day. You get the day all to yourself, to do anything you please. What types of fun activities would make your day?

So today my great but sometimes odd family all came together in Springfield, Illinois as I told you was going to happen yesterday. And what a wonderful reunion it was. Everyone, that includes my two sisters, Emily and Liz, and their significant others, Connor and Shaun, mom, dad, uncle, and I, and the son, Jace, of Liz’s boyfriend Shaun. We all had a very fun and exciting day filled with happiness, laughter, and a lot of conversation coming from one overexcited video game expert. 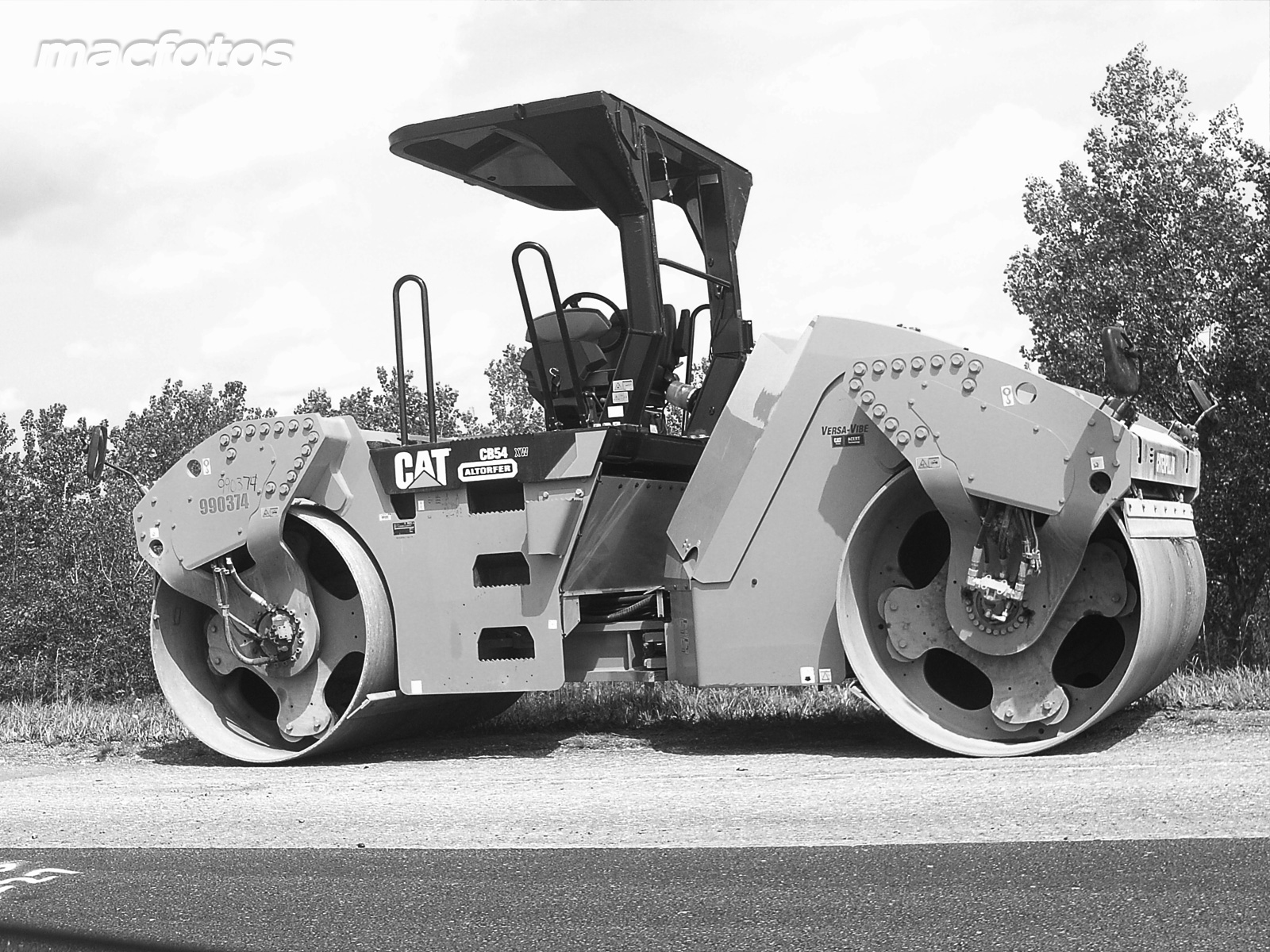 A highway asphalt rolling machine I saw on the way to Springfield. The only reason I took this picture is because we were in a traffic jam and stopped on the highway. 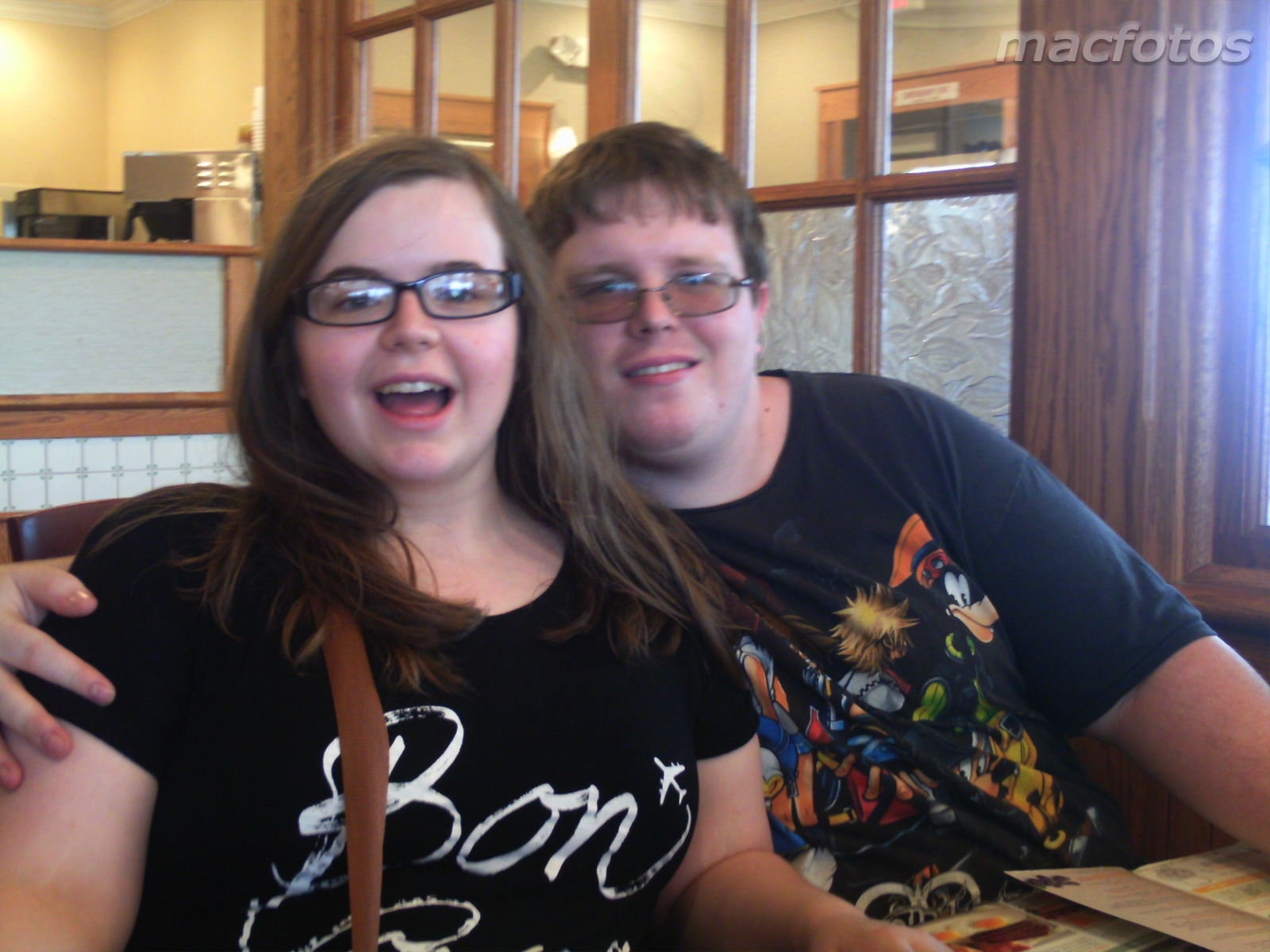 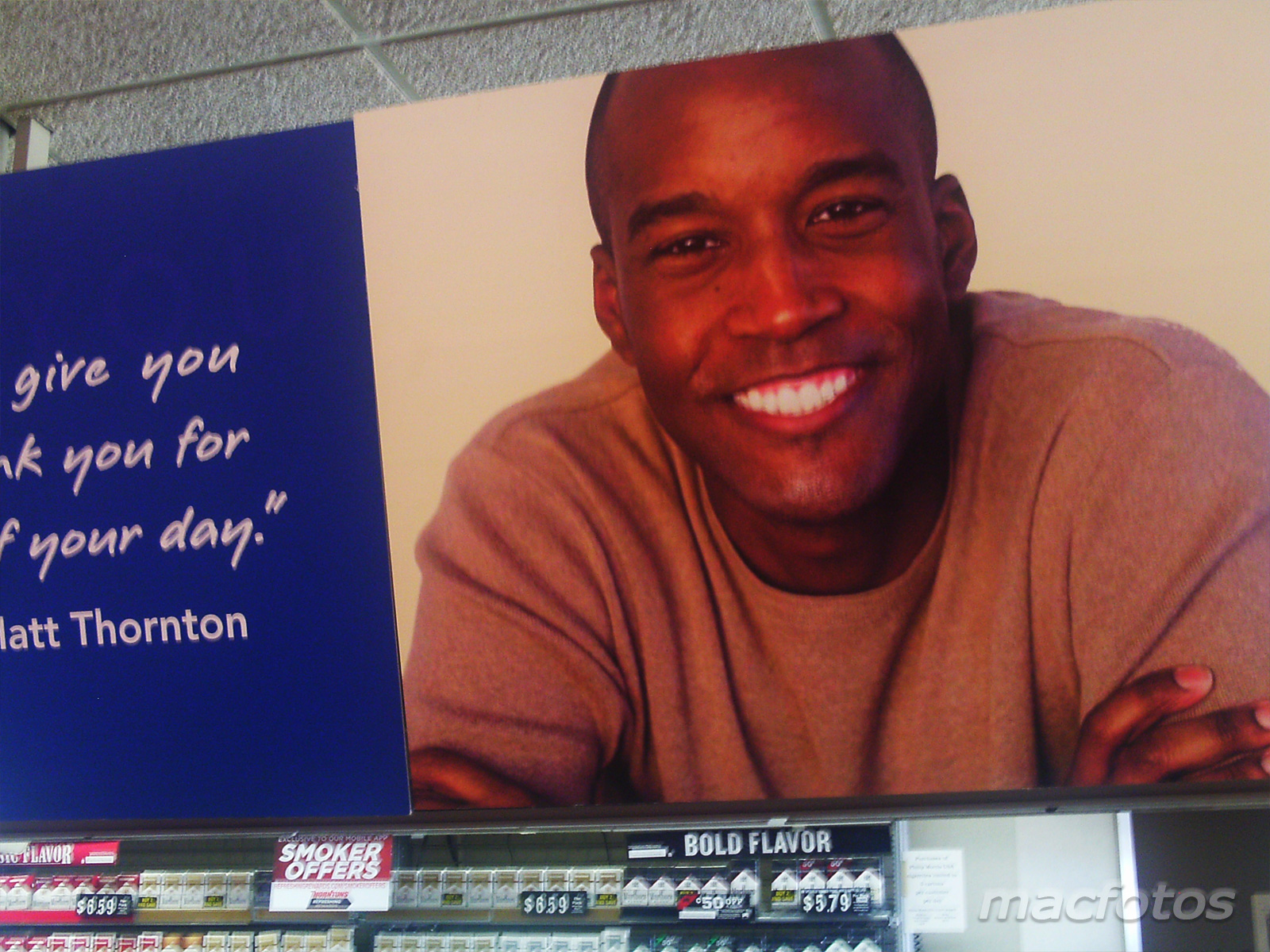 Matt Thornton – the greatest thing to come to convenience stores everywhere, that they even had to erect a giant sign of him. 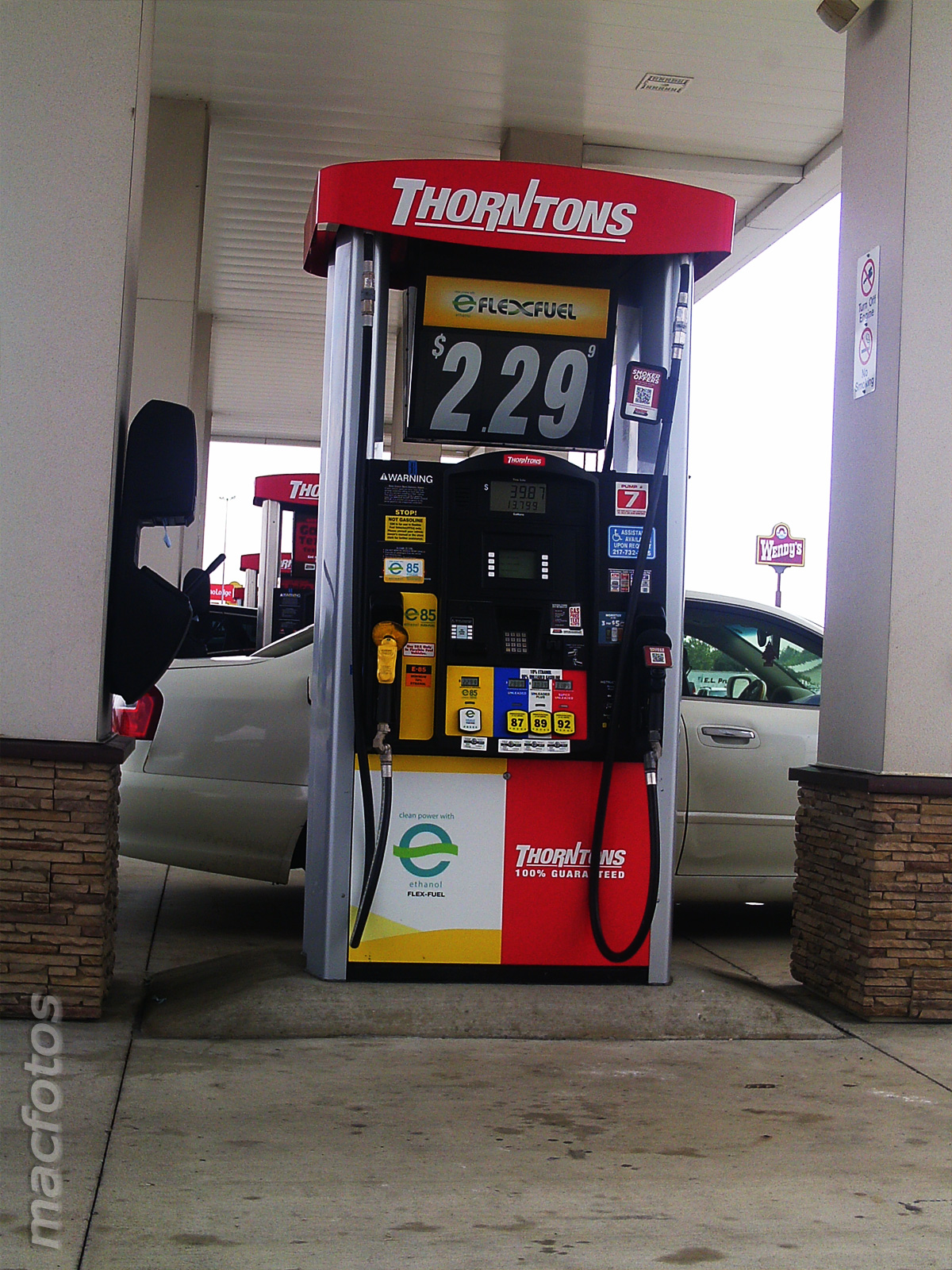 And a gas pump at Thornton’s. 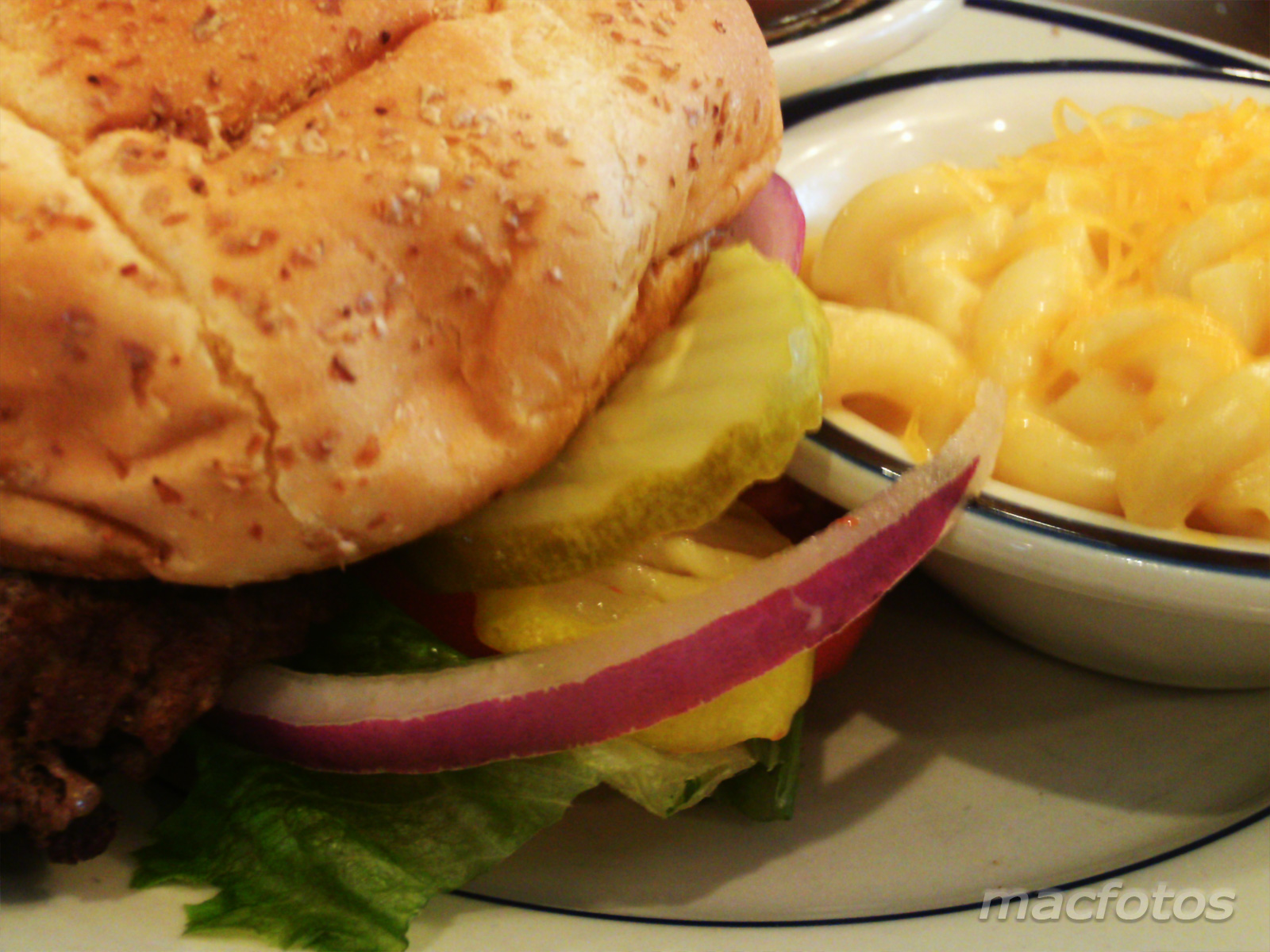 My meal at Bob Evans. 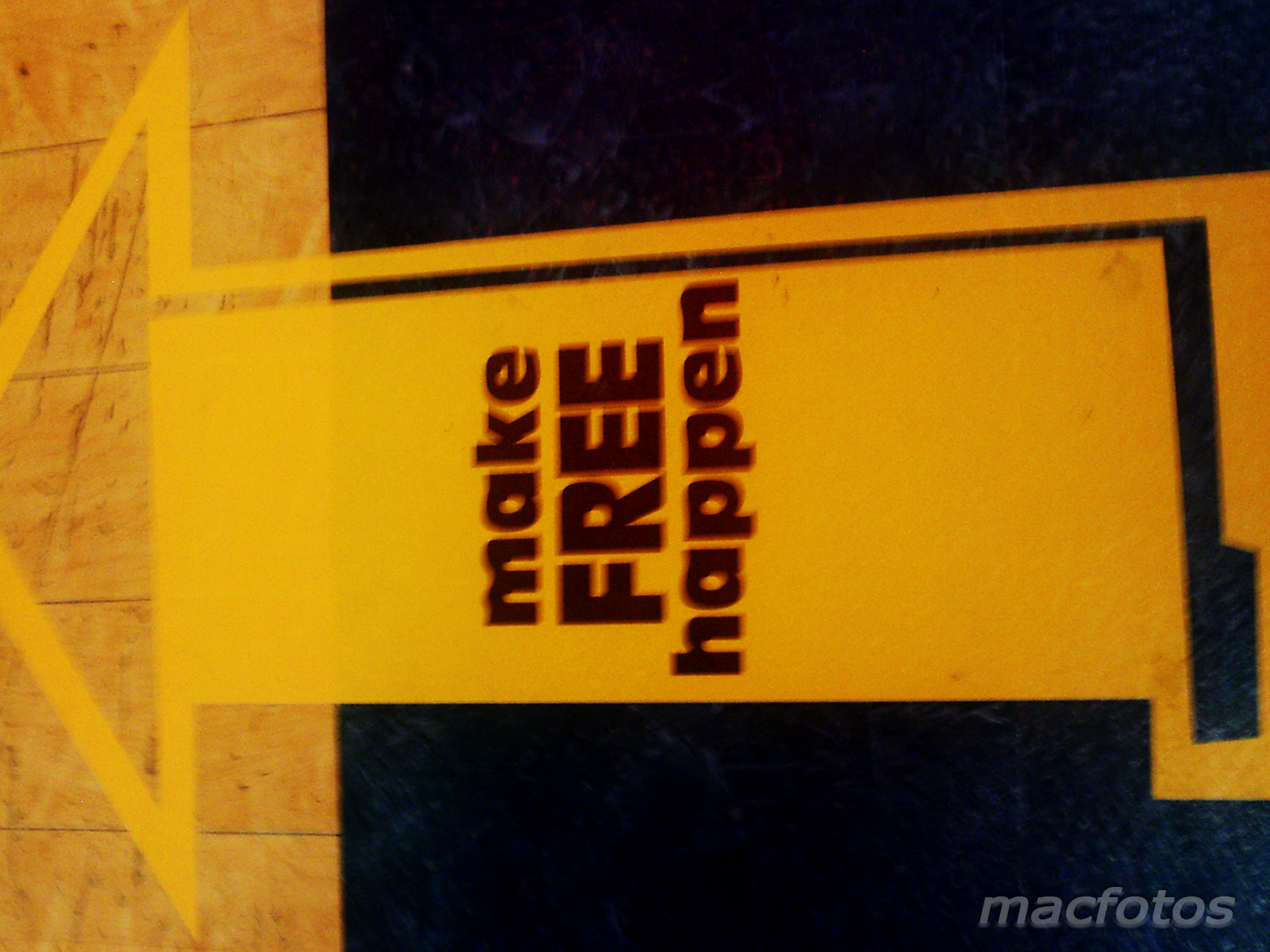 Floor arrow. How exactly do you make free happen? Oh, rob the place. So the arrow message is promoting shoplifting? 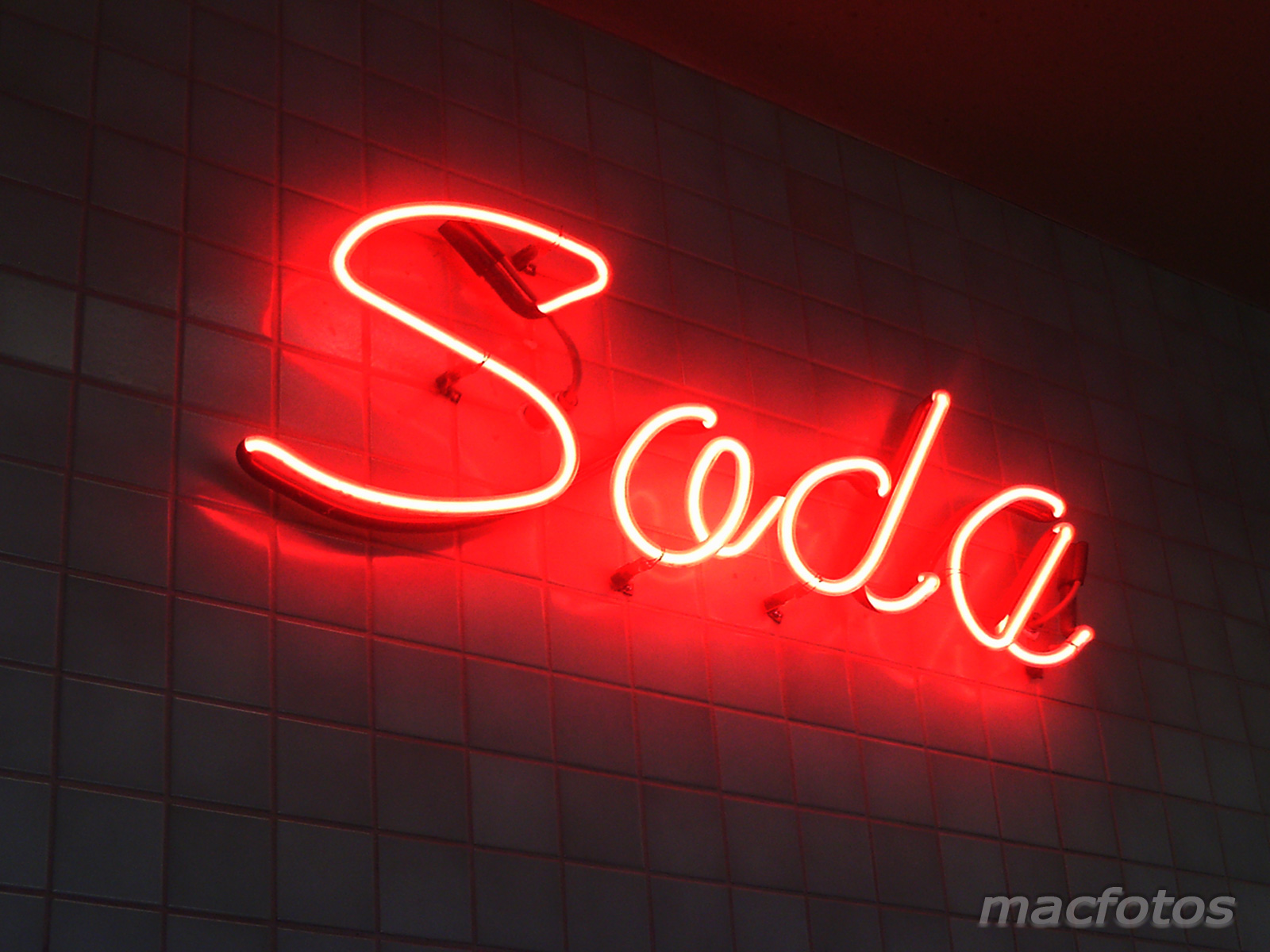 Neon lighted sign. Soda as they say in any state except Michigan, home to the word “pop”. 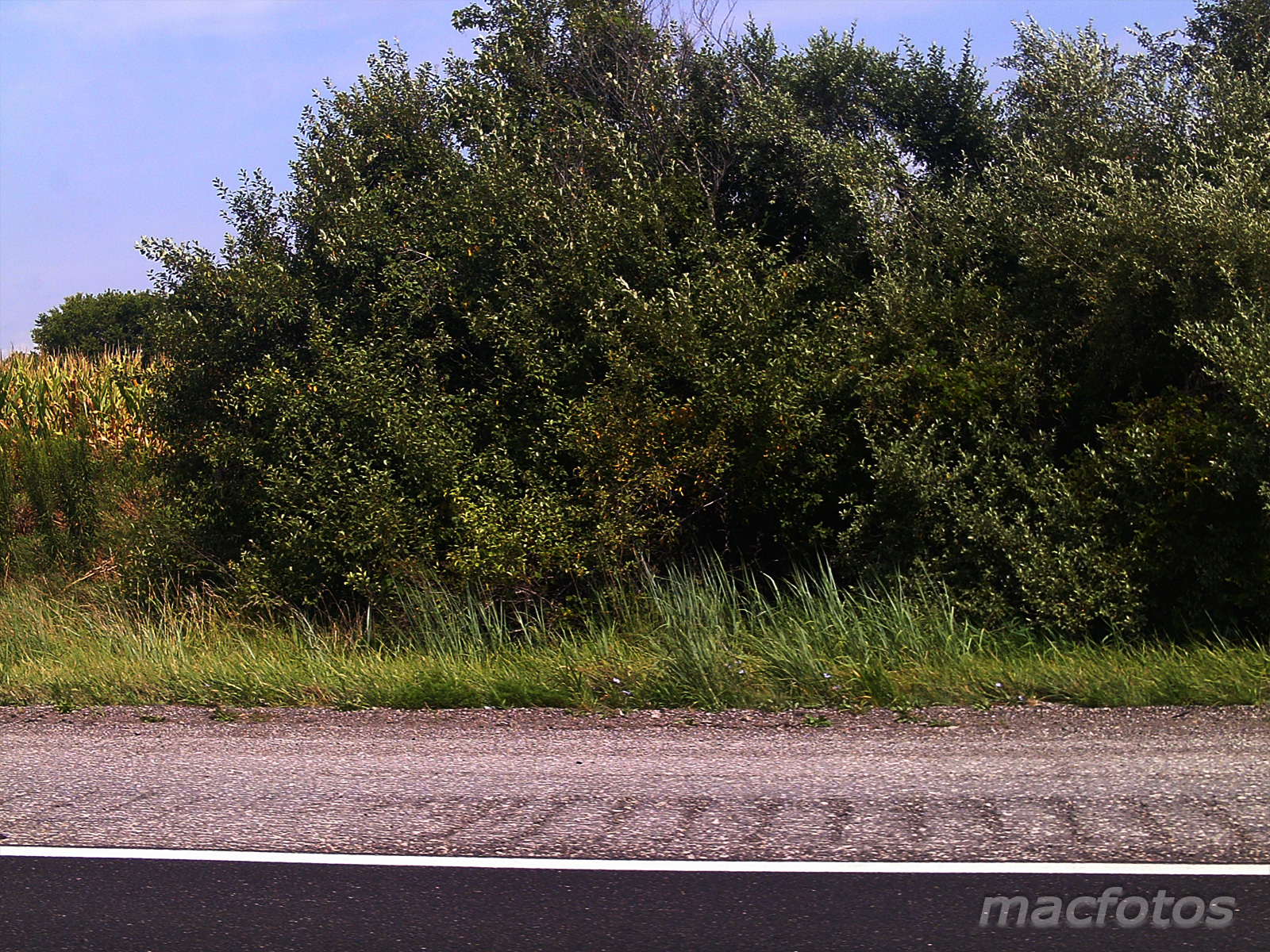 Scenery on the highway.

Overexposed picture of a frog on the outdoor patio table at the place we are staying, the home of an elderly lady with two grandsons.

Hickory River Smokehouse, where we ate dinner tonight. I had a pulled pork sandwich and couldn’t finish it because I was so stuffed.

Not so fabulous menu at Hickory River Smokehouse, a not so fabulous restaurant but the whole family was together for the first time. 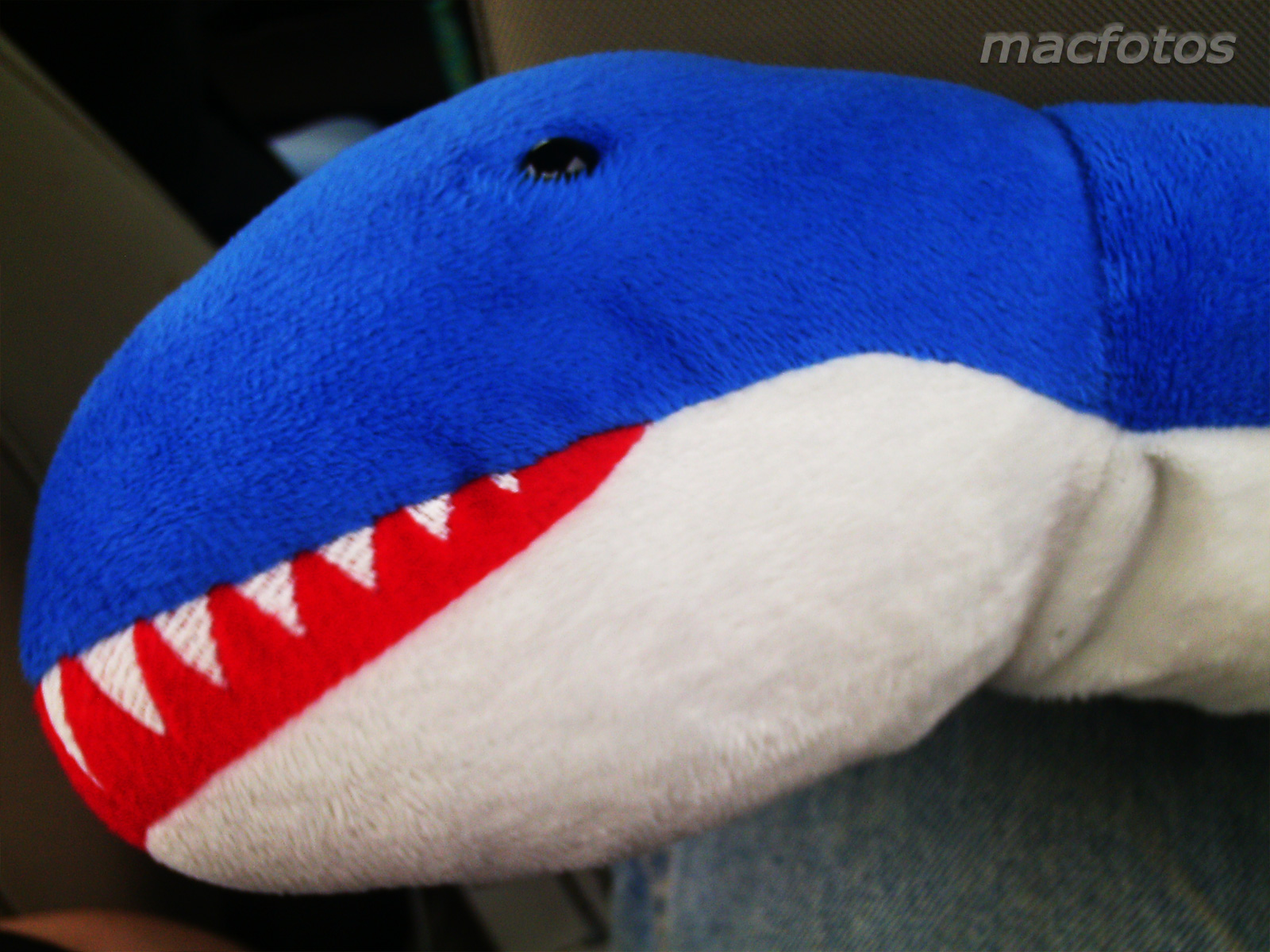 Sharkie! I met this odd looking stuffed toy today in Emily and Connor’s car. To say that we didn’t have the least amount of fun waving it out the window and hitting it against heads would be wrong.

Tomorrow, our stay in Springfield continues with our visit to the Abraham Lincoln national cemetery and museum. I will be interested to be visiting my very first gravesite of a former president or any significant figure in history for that matter. There really isn’t that much to Springfield besides Lincoln but having the whole family come together in one spot is what I will really take from this trip.

Weekly Photo Challenge: On the Way